This is an entry about raising caterpillars into butterflies or moths. I’ve been doing a lot of that this summer – it’s a great science project for kids or adults. It’s fun, I always learn a lot, and it’s good for the butterflies and moths too – when you put the caterpillars in a cage, you protect them from predation, and many more of them live to grow up.

One of the easiest caterpillars to start with is a Monarch. Monarch butterflies lay their eggs on milkweed plants, so if you can identify a milkweed, and look under the leaves during the summer, you can usually find eggs or small caterpillars.

Here’s a picture of Common Milkweed. There are several kinds of milkweeds, but this one is easy to find, and it’s usually in waste places so no one minds if you pick some. 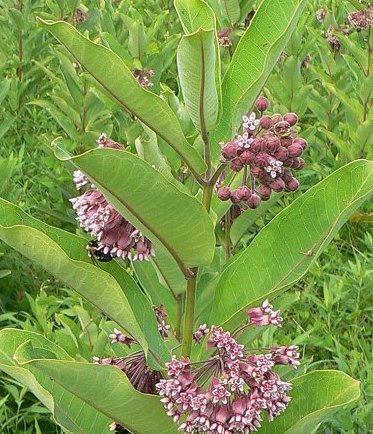 I like finding the eggs, because then I know the caterpillars will be healthy.  When I collect caterpillars, many of them turn out to have parasitoids. It’s pretty discouraging to raise a bunch of caterpillars, and then have them turn into wasps instead of butterflies.  (Normally only a few butterflies per mated pair survive – that’s life in the wild.  Parasititoids have to eat too!)

Here’s a photo of a monarch egg on a milkweed leaf. It’s that tiny light colored dot on the underside of the biggest leaf. 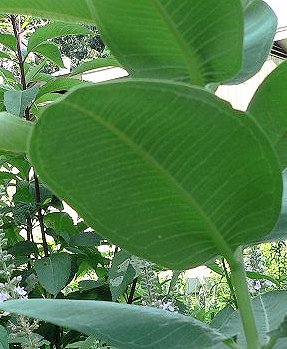 Here it is close-up. 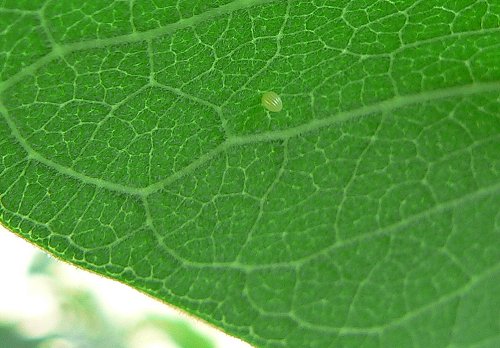 The egg is light green or white, and about the size of a pencil point. There will usually be no more than one on the underside of a leaf. I cut off the leaf, or the stalk with the leaf on it, and put the stem into some water. It’s good to cover the water so when the caterpillar hatches, it doesn’t climb into the water and drown. (Caterpillars aren’t very smart about that.) I usually stuff a wad of waxed paper or plastic wrap into the neck of the water jar.

You can keep the jar with the milkweed on a table, or you can put it in a cage. I usually use a large jar or a goldfish aquarium for one caterpillar, and cover the top with a small piece of window screen held on with a rubber band. (Be sure to keep the jar out of the sun – the sun will heat it up and bake the caterpillar.) You can use a larger aquarium with the kind of screen top you’d use for a reptile. Or you can make a larger screen enclosure that will hold more caterpillars. Be sure to give the caterpillars plenty of space – don’t keep too many in a small cage or they’ll get sick. Here’s the set-up I use for one caterpillar – using a one gallon glass jar. 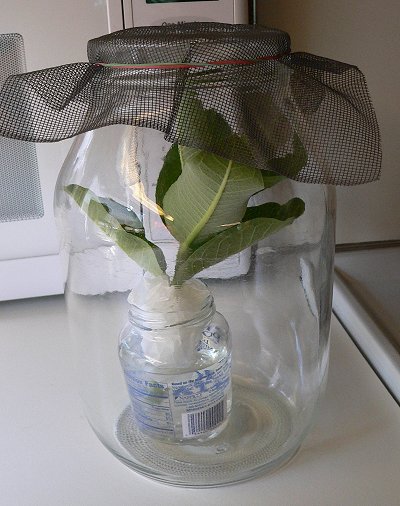 [One of the problems with putting more than one caterpillar in a container, is that if one caterpillar has a disease, it will infect the others.  OE (the parasite Ophryocystis elektroscirrha) is one common monarch caterpillar disease that’s easily transmissible.  I like rearing one caterpillar per jar, and running the jars through the dishwasher between rearings, because then I can be pretty sure I haven’t spread the disease.]

The egg should hatch within a few days. The tiny caterpillar will be less than ¼ inch long – you may need a magnifying glass to see it. It will eat the eggshell, and then eat a small crescent shaped hole in the leaf. Here’s a freshly hatched caterpillar. 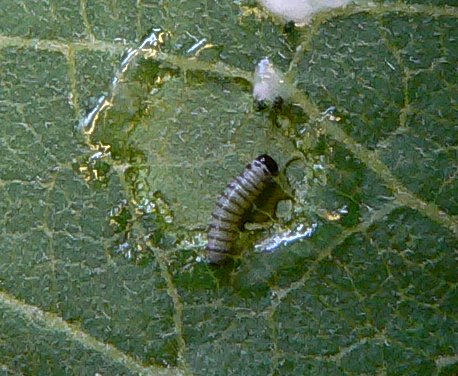 The caterpillar won’t eat very much at first. Make sure it has fresh leaves to eat, and clean out its “frass” – droppings – from the bottom of the cage. As the caterpillar grows, it will eat more and more – at the end it will eat at least one whole leaf every day, and it will produce much more frass.

As the caterpillar grows, it outgrows its skin. When that happens, it will stay very quiet for as much as a day, while it sheds its old skin. Underneath is a new skin that allows the caterpillar to get bigger. Usually it will eat the old skin when it’s finished shedding. The periods between shedding are called “instars”. In some caterpillars, the different instars look quite different from each other. Monarch instars are fairly similar – although there is a gradual change from a tiny green caterpillar with a big black head to a larger one with white, black and yellow stripes and a small black head. This is an second or third instar caterpillar. 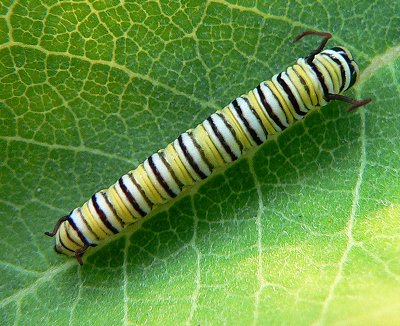 It takes about 10 days (and 5 instars) for the caterpillar to get big enough to be ready to make a chrysalis – sometimes a little less in hot weather. When it has eaten enough, it will start wandering around looking for a place to attach its chrysalis. At this point it needs to be in an enclosed cage, or it will wander away and you may not be able to find it.

Monarch caterpillars like to attach their chrysalises so that the hang down. If they’re in a cage with a piece of screen across the top, they will usually attach to the screen. Sometimes they’ll attach to a branch of the milkweed, or if they’re in a goldfish bowl, to the curved sides of the bowl. After attaching, the caterpillar will hang upside down in a “J” shape for about a day before it makes the chrysalis. Making the chrysalis is a very fast process – I’ve only actually seen it happen once and the whole thing took about 3 minutes. The caterpillar wiggles hard, and pushes its outer skin off and up. The bundle of shed skin falls off, and the green and yellow striped chrysalis stops wiggling and hangs still. The new chrysalis is soft and vulnerable at first – it hardens, becomes solid green and develops some gold spots over the next few hours. Here’s a completed chrysalis. 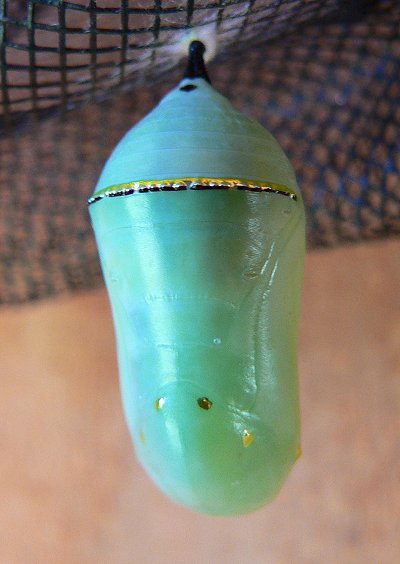 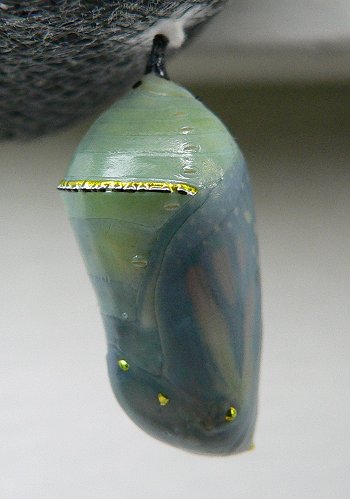 And here it’s very dark – just about ready to hatch. 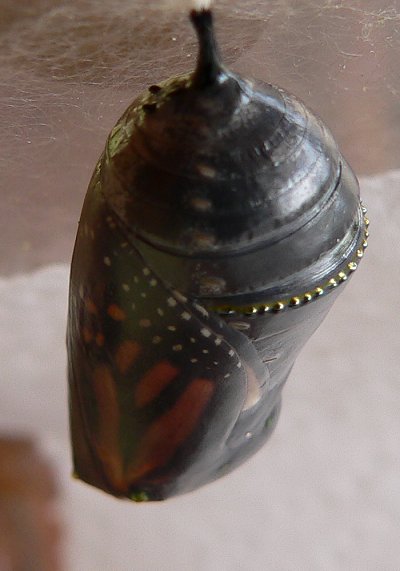 After about 5 minutes it looks like a butterfly. Its wings are still soft so it will stay still, hanging its wings down and waving them back and forth, for a few hours until they’re hardened. 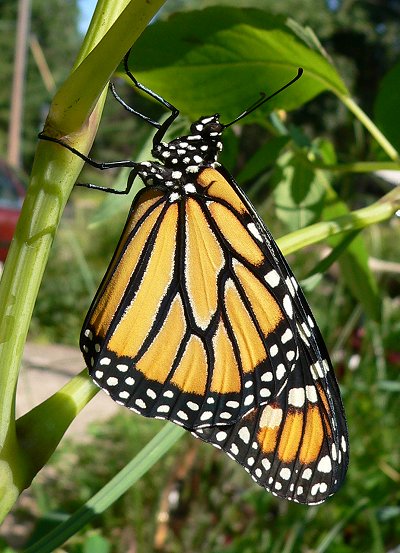 At this point you can open the cage and release the butterfly. Often, especially if the weather is cool and not too windy, the butterfly will be willing to sit on your finger for a few minutes before it takes off. If it stays hanging upside down on your finger and doesn’t fly away, it means that its wings aren’t quite dry. To give it a little more time, you can put your finger next to a plant stem, let it transfer its legs to the stem, and then let it finish drying. It will fly away when it’s ready.

To learn more about Monarch migration go to: Journey North or Monarch Watch